Barclays just released the continent’s first ever Africa Financial Market Index Report. The Market Index is an experimentation of the capital markets in 17 African countries including Kenya. The aim of the index is to provide a useful tool for the investment community as well as Africa to gauge countries’ performance. The Index which will be produced yearly will promote financial market development which offers additional growth and funding opportunities for local firms providing access to long-term financing in order to help them overcome some of the challenges of low lending rates. The countries were analyzed against six pillars; Financial markets depth, access to foreign exchange, market transparency & the regulatory environment, macroeconomic opportunity, enforceability of agreements and capacity of local investors.

Due to its size and historical position, South Africa topped the list scoring 92 out of a possible 100. This was due to its highly developed markets however still facing a challenging macroeconomic outlook. Following it was Mauritius scoring 66, and Botswana scoring 65. Kenya ranked 5th with 59 points. However, Kenya was found to be the most sophisticated in East Africa due to innovations and reforms by the Nairobi Securities Exchange (NSE) and the Capital Markets Authority (CMA). Seychelles and Ethiopia ranked lowest due to lack of financial market depth and breadth. 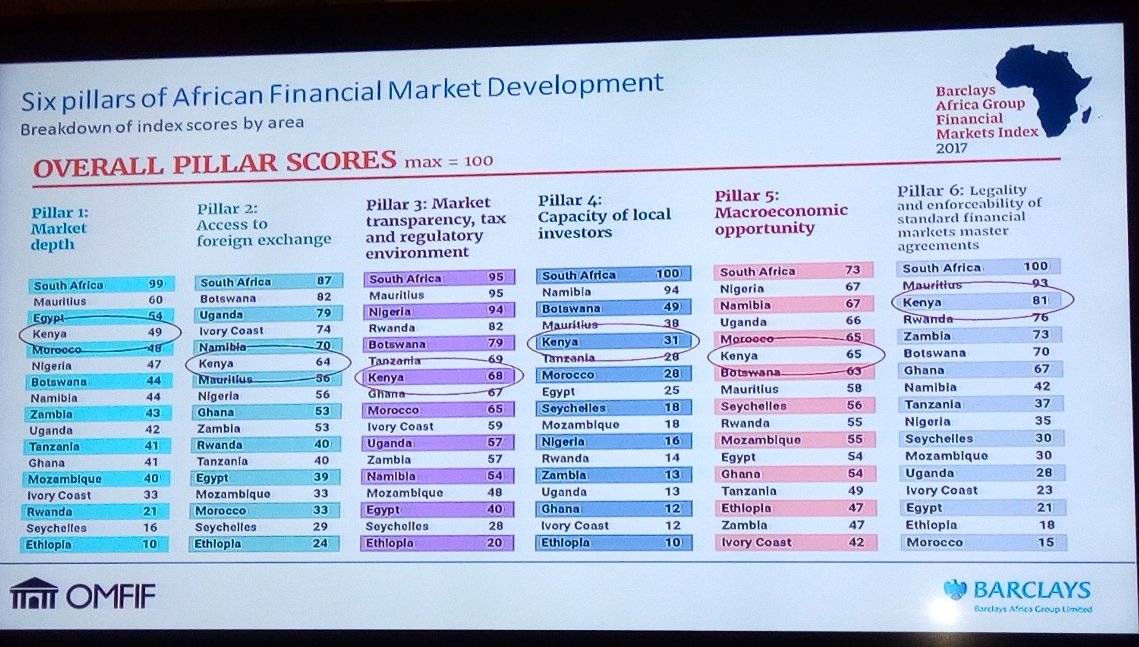 African financial markets have suffered due to lack of depth compared to other continents. Poor market depth reduces the ability of firms and investors in Africa and beyond to exploit opportunities. African firms require growth finance from abroad that is often not available from domestic or regional sources.

According to the World Bank Enterprise Survey, more than 20% of African businesses view access to finance as the biggest obstacle to growth. The issue is more pronounced for small and medium enterprises which form the backbone of the economy. This is due to high concentration across the banking sector in Africa which causes the high-interest rate to spread. This high cost of loans then becomes a problem for the private sector. Banks then opt to focus their lending on large enterprises and government entities in order to minimize their risk exposure.

Another issue with financing businesses is the issue of the regulatory issues such as the type of assets that are acceptable as collateral for bank loans. This low market activity is reflected in the low score for liquidity indicators across the index countries.

Dedicated market segments to deepen markets is of great importance in increasing small and medium-sized enterprises access to financial markets. There is also need to improve regulatory and policy environments to attract foreign capital. The issue of openness is an important focus for investors since the level of control on access to foreign exchange is a key factor in determining investment flows.

A high ratio of portfolio investment flows compared with foreign reserves could be a source of financial instability in the event of large and sustained outflows which cause the exchange rate to depreciate and general financial conditions to tighten.

Openness to foreign financial flows coincides with risks. During the survey, investors said that lack of currency movement resulting from currency controls can present sources of instability in the longer run. An important gauge of foreign exchange liquidity is the amount of foreign exchange traded in the interbank market. Low turnover exchange ratio reduces transaction speed and lowers liquidity.

African countries have limited sources of domestic capital thus there is very low volume of trade which eventually affects liquidity. African countries should look into outward investors. There are also regulations and policies that need to be revised to encourage foreign investors to venture into a country.

Some countries like Mauritius are boosting their domestic investor base by implementing incentives that raise the ratio of local investors to the total population.

Strong regulations can enhance financial stability particularly in underdeveloped markets but the cost of implementation can be high. African countries need to address overlapping regulations and lack of coordination. What is needed is a tax environment which at the minimum does not penalize financial market transactions which aim to encourage through incentives and other fiscal measures.

Countries who have ranked low in this pillar including Rwanda owe it to a mixture of low tax treaties and financial market incentives, high withholding, capital gains and taxes and long rebate periods. On regulatory and reporting issues most African countries remain far less developed than the main financial centres of Europe, Asia, and North America. This is due to fast-changing nature of global financial regulations and reporting standards following the global financial sector.

The need to regulate financial assets has led to overlapping rules which hinder market development. Many countries tackle this by the creation of capital markets authorities and national policy frameworks for developing financial markets.

Survey respondents also highlighted the importance of a stable regulatory environment. This is because the development of capital markets is the function of underlying investment and capital deployment activity. The absence of regulatory certainty can be highly damaging. These regulations need to be flexible dealing with the ever-changing financial landscape.

Investors in African countries require a complete asset market to meet their objectives. Asset shortages restrict African investor’s choice and push them towards international markets. The relatively small size of local financial markets and the relative illiquidity of their assets have created difficulties for the growth and development of local investors.

On average, 50% of institutional investors in Africa allocate a portion of their portfolios to assets outside their own market but their investments remain largely within their own bloc. To attract investors from outside the home market there is a need for diverse, liquid and deep markets. For instance, Namibian investors are active in South African markets and Kenya is active in Mauritian markets. This is why these areas reflect high liquidity of these locations.

Majority of pension funds between 2014-2015 in all the 17 countries were in net commodity exporting except Ghana. It was an exception because pension assets grew by over 50% in 2015. This was as a result of a higher asset base stemming from an increase in participation of informal sector firms. Growth in the capacity of local investors, as well as the size of the listed assets, depend in part on the prospects for economic for economic growth and stability in the coming years.

Countries with diversified economic structures and strong domestic demand have coped better with commodity price fluctuations. GDP Growth across Africa a whole was 2.4% in 2016 down from 4.2% in 2013.  This was the last year before the rapid decline in oil and commodity prices. The subsequent collapse in commodity prices significant impact on export revenues fiscal balances, currency values and capital inflows across the continent. This pillar assesses the underlying macroeconomic opportunity through three key factors which are; Economic performance, macro-transparency, and financial risk.

The pace of economic expansion across the 17 countries is expected to pick up in 2018 to 5.1% driven by recovery commodity prices improvement in macroeconomic management and a rise in domestic demand. Past experience highlights that a supportive macroeconomic framework, with sustainability monetary and fiscal policies, is highly conducive to encouraging investment and providing resilience in the face of uncertain external conditions.

The export competitiveness of countries in an index provides an important indicator of future growth prospects. Strong export figures can reflect both sound domestic economic policies and diverse export partners which can be useful to minimize negative demand shocks.  Countries like Ghana have increased their export market share by over 166% in the past five years indicating significant improvements in competitiveness.

The macro opportunity score on the index is influenced by each country’s exposure to specific financial risk. This is determined by external debt to GDP levels as well as by the quality of assets in the banking sector. This factor is an important consideration as countries with high non- performing loan ratio may face elevated financial risks and vulnerability to external shocks.

African banks are however reluctant to lend to smaller borrowers owing to risk aversion information asymmetry and lack aversion, information asymmetry and lack of collateral assets. By focusing lending on larger companies banks may manage their vulnerability to rising NPL ratio but at the expense of lowering credit to smaller and medium-sized businesses that need it.

The importance of such transparency continues to grow as African countries become more dependent on the domestic demand for economic growth. Despite commodity exports remaining dominant across the continent as a whole, the role of consumption and investment has increased steadily over recent years.

Investors globally have sought higher returns than those offered in low yielding light developed markets. Africa can only benefit from this if it improves legal and regulatory certainty and boosts market transaction. Inconsistent regulations and uneven enforcement are a major hurdle for country’s growth. If investors lack confidence in a country’s regulatory framework they will not deploy capital in that country.

While some countries are well working on these issues, the underdevelopment of others holds back the regions ability to expand markets through establishing bourses. South Africa is only of those 17 countries where netting and set-off of collateral positions are enforced. Most countries that ranked poorly in this pillar like Egypt and Morocco have their own standard agreements developed in their own jurisdiction which are incompatible with International market participants.

Most countries need to prove the adherence to international standards and financial agreements for investors to view them as attractive areas for investment.

Here is a breakdown of what’s happening in Kenya – The Barclays Macro Economic Report Breakdown. You can download the report for Africa here.

When We Say Africa Rising, Who Exactly Is Rising?

Entertainment: Narcos Is A Series To Check Out

How To Gain Weight In A Healthy Way

How To Gain Weight In A Healthy Way

How to secure your online accounts

Health And Nutritional Benefits Of Arrowroots