Barclays Africa Group Limited launched their Macro Economic Report and the report covers the key areas affecting the economy from a global, regional and country based level. This year’s report covered issues that have impacted growth in Africa and it has also served as an intricate guideline to the economic forecast for the year 2018. The breakdown of the report was done by Jeff Gable, Chief Economist at Barclays Bank after an introduction by Jeremy Awori, the Barclays Bank CEO.  This report gives insights for governments, policymakers, the business community, investors, and other stakeholders on what’s happening with some of the risks and possibilities for growth in the region.

Some of the factors affecting growth in Kenya include politics and political uncertainties, agriculture, an appetite for infrastructure projects, energy etc. There is concern that Kenya is borrowing too heavily, and paying back loans is taking up money which should be used on development. Some of the global issues that were highlighted in the report include the Trump Factor, the Italian Elections, the German coalition, the secession from Spain by Catalonian and also global warming.

Jeff Gable stated that we were getting to 2018 on a great note with the global economic growth up by 3.9% as of the end of 2017. With the positive momentum in areas such as manufacturing output and global trade, the economic growth seemed to be synchronized. However, even as we note the rise in economic growth, the report noted that there were key risks that continue to threaten economic growth in future. They include:

Looking at Sub Saharan Africa, the economic growth over recent years has risen due to commodity tailwinds with countries increasing the commodity sales in different countries, debt relief, and infrastructure which is a great influence for trade. However, the region is still battling with over-reliance on commodities, fiscal rebalancing, and drought which has devastated the agricultural sector in many countries. In 2018, the region’s economic growth is projected to hit 5% but it would be smart to remain mindful of the risks such as 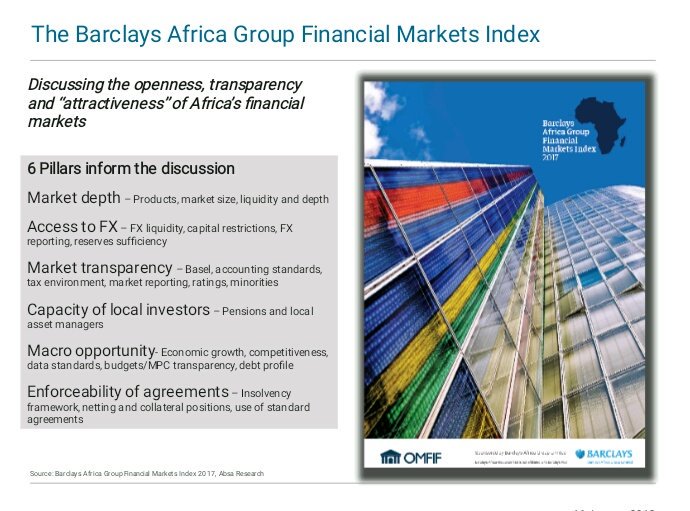 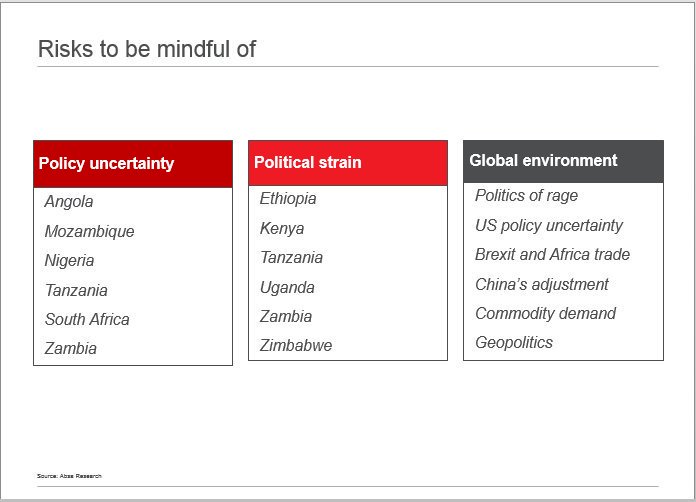 There has been a notable change in the Forex Exchange Markets with sharp forex deteriorations. The deteriorations have however slowed down in 2017 which recorded slower paced deteriorations as compared to 2016. However, it is important to note that Kenya recorded the most stable forex exchange rates as compared to other Sub Saharan Africa countries. The recent trends show that the Foreign Direct Investment (FDI) into Africa has improved. Most of the investment is seen to come from China, Morocco, The United Arab Emirates, The United States, Japan etc.

Jeff Gable went on to state that one aspect that may not be addressed often in terms of economic growth is global warming. The report highlighted that Africa is getting the lions share when it comes to climatic changes. Global warming affects the needs of various sectors such as manufacturing and agricultural sectors. It affects productivity and disrupts where most people live and work. In the long run, the small changes to these sectors as a result of global warming significantly impacts the economic growth. 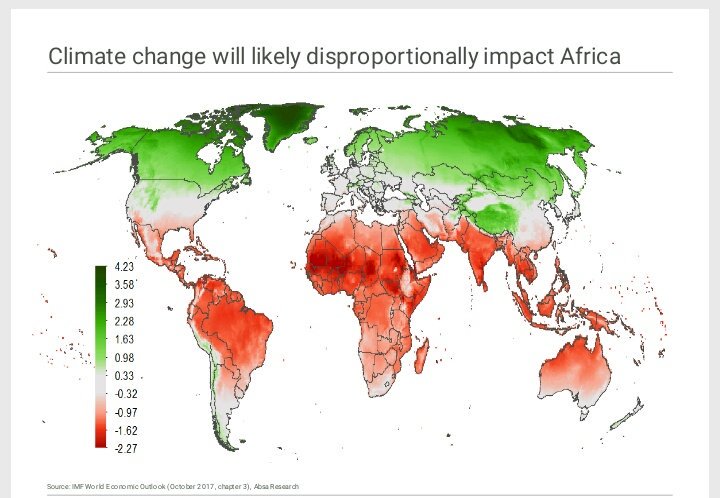 The report then took a more detailed look at Kenya’s economic growth. One of the aspects that affected the economic growth in the country last year was the political tension. In 2018, the political calm and improved weather conditions are expected to assist in the recovery of economic growth. When we look into our economic sectors, tourism, real estate, information and communication are leading in the contribution to GDP growth in terms of expenditure. The agricultural sector is lagging behind which is attributed to the drought faced by the country in 2017. The country also recorded a dramatic recovery in the Purchasing Managers Index (PMI) with the index reading higher than 50 which is an indicator of expansion in the economy. 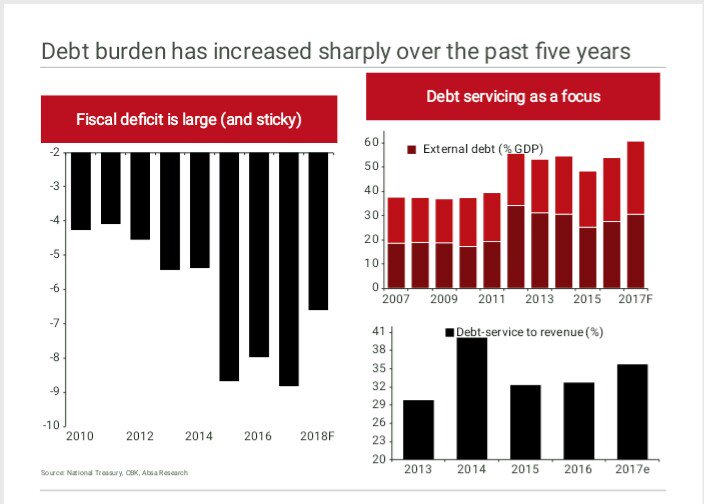 The projection is that the tourism and agriculture sectors will contribute positively to the economy this year. The tourism sector is booming as tourist arrivals and receipts moving higher by the day. The sector has been improving steadily since 2012 with growth margins of up to 20% in recent years. The last quarter of 2017 registered about 200 million dollars in service receipts. As for the agricultural sector, tea and horticultural crop exports are doing relatively well with the slight decline noted in 2017 due to drought. 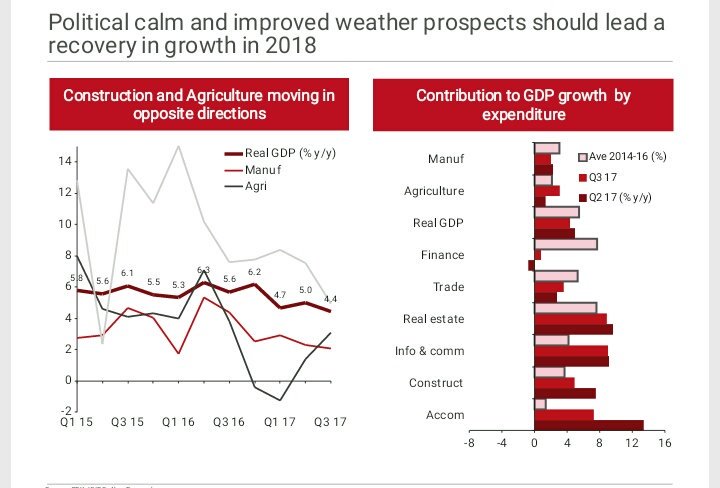 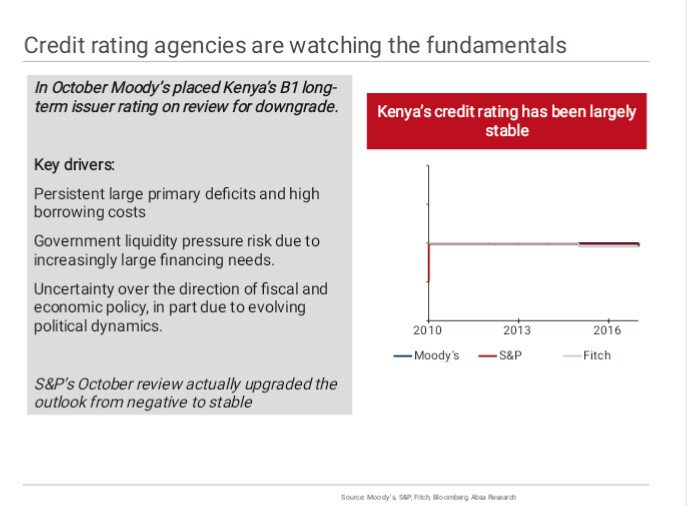 When it comes to infrastructure, Jeff Gable stated that analyzing the sector as it is, we can start with accessing the impact of the SGR train which has led to the growth of tourism and that is just during the first phase. The SGR has started operating cargo. Intended projects in the works such include;

With these proposed infrastructure projects, the country’s development is on track. However, Jeff Gable stated that the government may need to look into the private sector for funding since public finance is already strained as it is.

The dollar was predicted to increase due to the tax cuts in the US that will encourage American companies operating internationally to bring back their money into their county. There is also the issues of occurrences such as the Brexit deadlines will impact the shilling significantly.

The debt burden has increased sharply over the past 5 years. In Kenya for every 3 shillings collected in tax, one shilling goes to paying interest on the debt incurred by the country yet we are still struggling with debt. Jeff Gable credited the struggle to keep up with debt management to government replacing long-term debt with short-term debt which strains the economy in the long run.

According to the report, credit growth has also stalled. This has been attributed majorly to the Interest rate caps which have been implemented in many countries. The effect of this interest caps is;

There is however not much that will be done about the interest rate caps in recent times. Additionally, consumers who have a habit of defaulting loans will now be at risk of not accessing any other loan from any financial institution because of IFRS9. Banks will also provide capital for loans for government securities.

With Kenya hopefully getting into a calmer political climate this year, there is need to sit down and set policies, find ways to improve risk management techniques, discuss on how to improve the agricultural sector to promote the growth of the companies GDP. There is need for the government to digitize the process of getting title deeds because it takes too long which affects investments. One of the key takeaways was that the government needs to work more with the private sector in private-public partnerships to achieve its dreams for prosperity for its citizens.

Behind The Scenes: Meet Papi OdeQ – An Actor And Musician Who Will Always Leave You Smiling

Behind The Scenes: Meet Papi OdeQ - An Actor And Musician Who Will Always Leave You Smiling