Travel: The Art Of The Bull Fight… In Kenya

Bullfighting is a highly popular sport in Mexico, Spain and parts of Columbia. In this sport, heroic matadors are placed in an arena to battle it out against rowdy bulls. But in Kakamega County of Western Kenya, the sport takes a whole different dimension – bulls are not pitted against matadors, but against fellow bulls.

Khayega – In a football stadium tucked away in western Kenya, the contenders’ pace and snort under brilliant blue skies as gusts of wind carry the cheers of thousands and trainers fret in pre-bout rituals. Oblivious to the noise and bets being placed, “Iminyi” and “Ingwe” prepare for battle, racing up and down the pitch as if possessed before the match begins with a sharp command. They charge in a cloud of dust and lock horns. The fight is on.

This is bullfighting, Kenya-style; an altogether different version from the better-known and more controversial man versus Toro Spanish blood sport. An art, a fight, a little drama, probably more interesting than anything on a T.V screen, this event is drawing huge crowds to this town about 500 kilometres from Nairobi. Let’s go Kenya mentions that one weekend a month, members of the Idakho and Isukha communities of the Luhya tribe march their prized fighting bulls to Khayega for the matches some local leaders hope to turn into a draw for safari-going foreign tourists.

Thousands of spectators troop to the bullfights to see the spectacle and place small wagers on the fights, a Luhya tradition for time immemorial. The bulls are given intriguing names and it is not uncommon to find bulls with names from Hollywood folklore like ‘Rambo’ or those named after professional wrestlers like ‘Undertaker.’ Afktravel humorously shares how in 2012, at the height of the U.S. presidential campaigns, ‘Romney’ squared it off against ‘Obama’ in an ironic duel.

The audience does not require seats. Chanting traditional war songs and poking the air above them with twigs, the residents look on as a choice bull from one village locks horns with the bravest from an “opposing” village. The bulls involved are bred specifically for this purpose, fattened for their day of glory. Before the day of the fight, the bulls are fed with a concoction of busaa – a local homemade beer – that is believed to make them more charged. More brutal bulls take in a whiff or two of marijuana (weed) hours before their fight. It is believed they are more savage after smoking the herb. 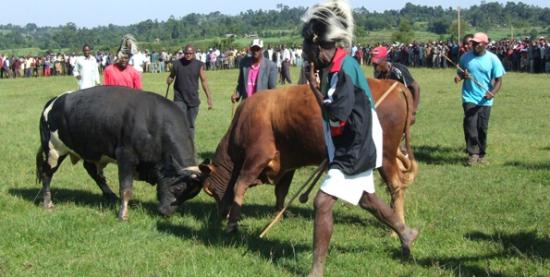 According to Za Kenya although the culture of bullfighting in Western Kenya was considered of no use, the government of Kenya has finally recognized its usefulness to the community members of Luhya in Kenya. Bullfighting in Kakamega is an aspect of the local community’s culture that has been carried on for years. It is only recently that the spectacle gained popularity as a tourist attraction. The government of Kenya contributed Kshs.12.5 million that was used in the construction of Malinya stadium in Ikolomani constituency in Kenya.

Dr Bonny Khalwale, the senator of Kakamega County, has been vocal in the support of the sport. He is an ardent fan of the sport and owns a couple of bulls himself. On the downside though, the culture has faced opposition from animal rights activists. Due to this, some measures were put in place for the treatment of bulls injured during fights. In 2008, an attempt to move the event from Western Kenya to the country’s capital city of Nairobi was met with resistance by locals.

Despite all these challenges, bullfighting continues to play an integral socio-cultural role in the communities around Kakamega. The spectacle continues to rake in lots of money for residents, in form of prize money and sponsorships. These events have been used by politicians as points of rallying their supporters.

With local and foreign visitors curious to witness the fascinating culture, bullfighting stands out as a unique tourist attraction in Western Kenya.

Why you should travel to Western Kenya

Finances – those coins can make a difference

Different Ways You Can Get Rid Of Unwanted Hair

7 reasons why the GES is important for entrepreneurs