Why the giraffe’s neck is long.

by Rayhab Gachango
in Uncategorized
Reading Time: 3 mins read
8 1
1
10
SHARES
57
VIEWS
FacebookTwitterWhatsApp
Long time ago in the days of our ancestors there lived in the savanna many animals.  One of these was the giraffe.  In those days the giraffe was very short and did not have a long neck.  The giraffe loved to eat but he could only eat grass and leaves of shrubs because he was so short.  This made him unhappy, because all his tall friends like the elephant told him that the sweetest leaves were on top of the trees.
He had a great desire to taste the leaves so he talked to his friends and asked them how he could manage to eat those leaves.  They advised him to go and see the medicine man who was the hare.  He took their advice and went to see the hare.
The hare told the giraffe that he would make him tall by stretching his legs but that the giraffe should return before the sun set or he would suffer the consequences.  He applied some ointment on his legs and they became long.
The giraffe was very happy.  As soon as he had his long legs he run to the trees with the juiciest leaves and started eating.  He ate and ate and ate so as to eat his fill before he had to get his short legs back.
He was enjoying eating so much that he forgot that he had to go back to the hare by sunset.  Soon it started getting dark and he remembered the warning of the medicineman.  When he tried to move away from the tree he was feeding under his head got struck between two branches because his head had puffed up because of the food he had eaten.  He tried to come out but he was stuck.  Poor giraffe.
He cried out for his friends and they came and tried to pull him out.  Alas, it was all in vain.  Then one of the animals went to hare, the medicineman to see what he could do.  The hare came, climbed up the tree, and applied some medicine to the giraffe’s head.  It came out from between the branches.  The giraffe was looking very funny with a long neck and long legs. 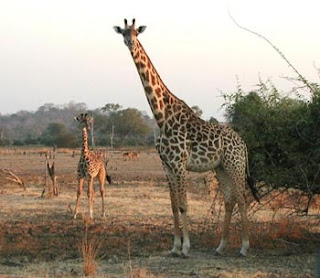 The giraffe asked the medicineman to change him back to his normal self but the hare refused.  He told the giraffe that he would remain like that.  That was the price he would have to pay for being so greedy and not being content with what he had.
Morals of the story:
Be happy with who you are.
Greediness does not pay.
Raylitpoems 2002
PS. I wrote this story as one of a series of stories I wrote in writing for children class at Daystar in 2002.  You can find another one Karanja and the City Bullies here http://raylitpoems.blogspot.com/2010/05/karanja-and-bullies.html.  Karanja and the City bullies was published in the Daily Nation in the Children’s Corner between November 25thand December 10, 2010.  Who knows where this story will find itself.
Share4Tweet3SendShare1Pin1
Previous Post

Magical destinations for me! #TravelBucketList

Magical destinations for me! #TravelBucketList

Best Ways To Keep Your Duvet From Slipping!