Sticks and stones will hurt my bones, but words will never hurt me (it aint true) 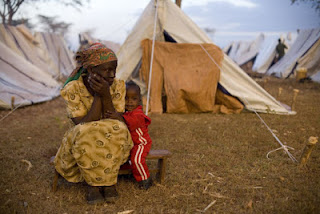 All of this because of words.  Words that were said casually then became a weapon to turn communities against each other.  When I was young we used to sing sticks and stones will break my bones but words will never hurt me. We were young and foolish then and we believed it.  Now that I am older and hopefully wiser I know that’s not true.  Words can hurt more then sticks and stones.
The violence in Kenya in 2007/2008 didn’t start with the person who drew the first weapon to hurt another.  It started with words.  Words were used to differentiate people.  We are such and such a tribe and they are not.  They are the enemy.  Seeds of hatred were planted a long time ago and they were festering in the minds of the people.  They germinated, grew roots, and grew into trees.  Words were used to encourage people to fight for what the “others” had taken away from them.  In whispers and shouts words were used to devise plans to take down the others and get back what belonged to “our people.”
In Kenya we all have biases and stereotypes.  Some were created by the colonialists in order to divide and rule.  Some we created ourselves.  We say this tribe is like this and this other tribe is like that.  Many times we say it as a joke but many times we believe it because we heard it said from the time we were children.  So we grow up with those words and gradually they acquire meaning and we take them as normal.  Then when our leaders state them they become reasonable.  Then they are used to turn us against others and take up weapons to hurt others.
The tragedy in this country is that mainstream media has been compromised.  Our politicians use the media to pass across their garbage and the media laps it up and broadcasts it.  After all it sells newspapers and makes people watch the news.
Social media in Kenya has become an alternative voice to mainstream media.  It can be a sober voice in a world where hate sells.  But that’s if we choose it to be.  Social media will not suddenly become a magic ward that makes everybody love each other.  But if we can use our presence in it to bring people together and show them that we are one people we will have gone far.  We can use our social media platforms like facebook; twitter etc not to hurt or wound others but to heal and to draw bridges between people.  We can use it to encourage people to look beyond stereotypes.  Social media can be used as a tool for dialogue, discussion, and building friendships.  Let us be social media ambassadors of peace.  Because we do understand the power of words.
Handle them carefully, for words have more power than atom bombs. –Pearl Strachan
Share6Tweet4SendShare1Pin1
Previous Post

Cupid Pour Me A Glass Of Love!

At What Point Did You Realize You Are An Adult?

6 Ways To Give Back During The Holiday Season