Afro Soul artiste, Sarah Jumwa Chihanga, known by her stage name Serah Sarah released her fourth single Kayumbet this week on Tuesday. Serah Sarah is a Kenyan recording and performing artiste living in Dubai. She started as a freelance cover song singer in various luxurious hotels and up class restaurants. She broke out as an artiste in 2014 with her debut single Dance with Me, a fusion of African and Western pop. Last year, she released Cheza Kidogo. If you ask me, she loves dancing. How else do you explain the titles of her first two songs?

‘Kayumbet’ is a word that rugby lovers know so well …. at least those whose teams win. It is, simply, the celebration that occurs when a team wins. This is the concept that Serah used in her latest song. The fast paced song is about celebrating life’s victory. The audio was produced by Congolese producer Frank Mastola. 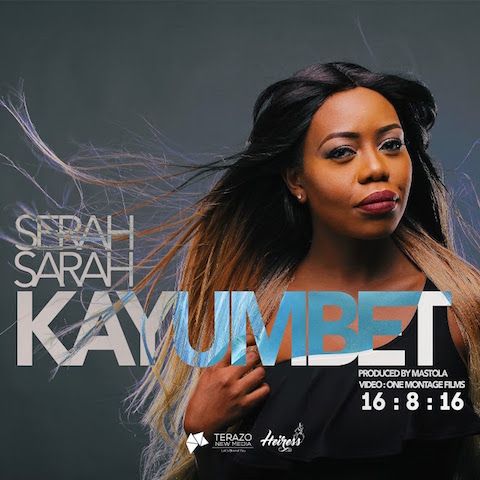 The video was shot in Tanzania. It was directed by Hamza of One Montage Films. One Montage Films have directed various videos such as Kambua’s Tutaonana Tena, Antoneosoul’s Paragasha and Jaguar & Sudi’s Barua Kwa Rais.

The 3 minute song starts with Serah’s vibrant voice followed by two bars of instruments before she begins singing. The beats go well with the bass voices in the background as she sings. Her vocal range is above average, but you get the feeling that she does not really venture into risky territory by going too loo or high. It is however, a bit of a strain to get the words, mainly because of the catchy beats. Not a bad thing, in my opinion.

The video begins with a heavily built topless man walking towards a rural homestead. Once the Afro pop dance beat starts, the male dancers come out to complement Serah’s dance moves and lovely voice. The video is colourful and simply done in a good way. Most of it is shot in front of grass-thatched huts in what could be a Tanzanian rural homestead. There are shots of drummers playing traditional drums that resemble the isikuti and African marimba. The choreography is perfect. Towards the end, they even throw in a snake to aid in the celebration. If you ask me, the video is as good as the song.

Most of the video is shot in one place. If the song was any longer, it would have become monotonous. The director probably solves this problem by having colourful dancers and switching their positions. Seeing as the song is based on a word that is synonymous with rugby, I would have loved to see the video incorporate an actual kayumbet scene by rugby players and/ or fans. Or probably ‘borrow’ a scene of when Kenya won the IRB series in Singapore.

My verdict, Kayumbet is a good afro pop song and the video is equally good. I shall give it a rating of 7.89 out of 10. Here is the video.

Reliable sources tell me that Serah is coming back to the country and is planning to enter the music industry in a big way. This is one of the songs that she hopes will propel her to greater heights and make her one of the biggest afro soul artistes in the country. Only time will tell. In the meantime, Kayumbet is worth your 3 minutes.

Infinix Note 3 Launched At A Colourful Event In Nairobi

Opinion: Kenya Needs To Get Its Athletics House In Order

I am a former investment Analyst who has recently ventured into the business world as a young entrepreneur. In my free time, I use the pen as a sword to shape the world so I can feel how awesome it would have been if I were a writer.

Opinion: Kenya Needs To Get Its Athletics House In Order