Health: Breast Cancer In Men – Here Is What You Need To Know

We are living in an age where cancer causes more deaths than HIV, Tuberculosis, and Malaria combined. According to the Kenyan Network of Cancer Organizations, cancer is the 3rd highest cause of morbidity in Kenya. Breast Cancer unsurprisingly is the most common type of cancer in women. However, it is important that men realize that breast cancer is not only limited to women. Last year an estimated 2,470 men were diagnosed with breast cancer with 460 of them succumbing to it.

The risk factors for breast cancer in men include; breast cancer in a close female relatives, taking estrogen, severe liver disease (cirrhosis), enlargement of breasts (called gynecomastia) from drug or hormone treatments or even some infections and poisons, diseases of the testicles such as mumps orchitis, a testicular injury, or an undescended testicle and history of radiation exposure to the chest.

This normally occurs under or around the nipple. They are painless but in some cases, they can hurt. They tend to get bigger over time and do not move around the breast. The lump can feel rubbery or hard. If one detects a lump of this kind, one should get checked. It is, however, important to note that not all lumps are cancerous. Some are caused by gynecomastia which is basically the enlarging of the breast or lipoma, which are fatty lumps that grow under the skin and are harmless. It is important to check with your doctor just to be sure. This enlargening of the breasts can be caused by; medications, heavy alcohol use, weight gain, or marijuana use.

Changes to the nipple

One of the areas that are often affected by breast cancer is the nipple. One may notice the nipple turned inside out which is what is commonly referred to as the inverted nipple. This is caused by inflammation or scarring of the tissue behind the nipple. Other signs to watch out for around the nipple are; 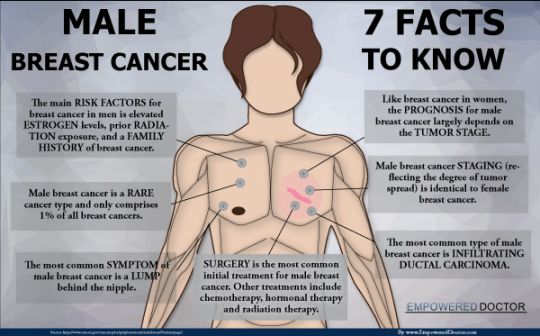 From Visually.
Small bumps in the armpits

When the breast cancer spreads to the lymph nodes under the arm or around the collarbone, it causes a lump or swelling. Sometimes this happens even before the original tumour in the breast is large enough to be felt.

Treatment of breast cancer in men is more or less the same as treatment in women. It can be through a mastectomy. However, breast-conserving surgery such as a lumpectomy may also be an option. Because men have little breast tissue, the doctor may suggest removing of the whole breast including the nipple to prevent it from spreading.

Early diagnosis can be life-saving. With more research and public awareness, men will see the need to get themselves checked in case they see any changes to their breasts.

Health: Why Access To Drugs Is Vital In The Fight Against Cancer

How To Break Out Of A Slump

Serial Dating: What Not To Do

Serial Dating: What Not To Do